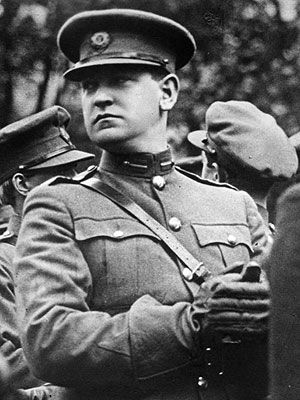 I often wonder how that young Private felt,
when he saw the blood flow from Collins,
to mingle with the dirt in Beal na mBláth,
struck down by a ricochet,
the echoes still reverberating,
ringing through the decades.

At nineteen a killer,
hands stained with blood,
armoured in the green of Éire,
sworn by oath to the Free state,
the pathway to our republic,
risen rebel soldier,
with hand grenade & Lewis gun,
bayonet & faith.

To watch Micheal dead,
the dark stains spreading out trickling to the ditch,
like civil war cancer which spread from shore to shore,
Did it fall silent?
Did the peal of rifles cease?
Did they lament & weep?
At another mothers son snuffed out amongst the ancient hills of Cork.

What genius lost in that moment,
as that spalling round tore his head off at the side,
what cursed luck has Ireland,
the bitter split and awful cost,
they felled the most loyal one on the roadside,
the Big Fella lay dead in the mouth of flowers.

Note:
My Grand-Uncle William Barry was the driver of the armoured car providing security for the detail in Beal na mBláth.
Sliabh na mBan, referred to as ‘Slievenamon’ in its earlier, anglicised form, is one of thirteen 1920 pattern Armoured Rolls Royce cars acquired from the British by the fledgeling Irish Free State.
All the males in my paternal line have worn the uniform of the state, for over 100 years a Barry has served beneath the tri-colour with Óglaigh na hÉireann.