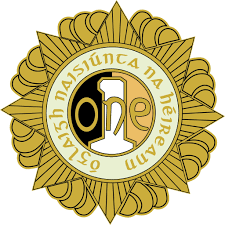 Reproduced here with the kind permission of the Editor of An Cosantóir, this is my article which featured in Special Commemorative Edition on the occasion of the Naval Service 75th Anniversary.

Remember those who served.

Óglaigh Náisiúnta na hÉireann (ÓNE) provides Support, Comradeship, Advocacy and Remembrance (SCAR) for Irish Veterans. The Organisation of National Ex-Service Personnel was formed at the Mansion House in Dublin in 1951. It brought together the National Federation of Irish Ex-Servicemen and the Association of Regular Ex-Servicemen which had emerged following demobilisation after the Emergency. ÓNE was strictly non-political and non-sectarian, and it remains so today. Lieutenant General Michael Joe Costello, the founder of An Cosantóir, was elected the organisation’s first president. On the inception of the unified body there were approximately 180,000 ex-service personnel in Ireland, General Costello sent this message to all ex-servicemen:

“It is important that we remember what brings us together – what interest we have in common. It is quite simply the common bond of past service in Ireland in her armed forces. We are old comrades in arms wishing to maintain and strengthen old associations and traditions.”

The majority of the veterans ÓNE helps are male, and the newly appointed Gender, Diversity & Inclusion Advisor Deirdre Carbery (Capt Rtd) says that, “ONE have developed a new Diversity & Inclusion Strategy, consisting of measurable goals and objectives that will assist us in identifying the barriers to full & equal participation and any opportunities there are to develop specific services.

As the first female to serve on the board she says, “We are committed to taking action to increase women’s participation across the organisation and in identifying how we can better support the needs of women veterans.”

ÓNE recognise diversity & inclusion as an organisational priority and are embracing it in its most holistic sense; sex, age, ethnicity, gender & sexual orientation. Deirdre says the message is that “ÓNE values you and wants you as a member because you are unique and because together, we are stronger. By nurturing different perspectives, we will encourage open dialogue and new ideas, in a trusting and respectful environment, that will enable us to connect with veterans across Ireland.”

While all ÓNE branches are open to any veteran member, there are three ÓNE branches with strong NS connections, we asked the incoming ÓNE President Dermot Higgins, who assumes office shortly, to tell us about its important work, and its plans for the future.

“There are 3 branches with a large NS connection. Cobh, Commander George Crosbie and the Erskine Childers Branch in Dublin. The Cobh branch is my home branch.

“The Cdr Crosbie branch was founded in 1990. The Erskine Childers branch was set up in Dublin, and brought together former members living in the capital. It provides a link to continue their comradeship with former shipmates.”

Dermot describes just some of the incredible work and community engagement of his local ÓNE branch, “The Cobh branch is involved in a lot of events locally in the Cobh and greater East Cork area. We play a big part in commemorations of the Lusitania and Titanic disasters. The branch also plays a part in remembering those who lost their lives in the War of Independence, the Civil War, and the Cork Harbour Tragedy. We also commemorate those lost in the Great War.”

As Dermot describes all the branches are engaged in providing support to veterans, much of the work been a collaborative effort between all, to quietly assist those veterans who need it. He encourages any veteran to reach out, and that the ÓNE is here for them, because “…as well as remembrance we also provide assistance to veterans. We provide food hampers at Christmas and Easter and other times as necessary. Our branch welfare officer is Jimmy Losty, former PSS NCO in Haulbowline. As with all such services confidentially is a prerequisite, and guaranteed.”

The Irish Naval Association is another independent group who under their current President Bryan Gildea (Lt (NSR) Rtd.) provide an outlet for veterans.

We asked Dermot to tell us about his own journey, and he describes having a connection to the military from childhood, “From a young age I was always interested in the Army. Having grown up listening to stories of my grandparents who were involved in the war of independence, to my uncle who was in the Air Corps as an apprentice.”

Military life began in 1977 when he “…started my career in September as an apprentice electrician. I spent three years in Naas, combining military and trade training. I passed out 3rd July 1980, a bittersweet moment, as my parents were not at my passing out. My dad passed away on 4th July about an hour after I arrived home. I was posted to the Naval Service as an apprentice electrical artificer. A big change to go from green to blue.”

A ton class Minesweeper was Dermot’s first posting in 1980, and it was there on LÉ Grainne, that as Dermot describes it that “…my love of the sea was born. At that time, the Naval Service was unheard of outside of Cobh or the coastal towns. Indeed, a lot of people did not even know we had a Naval Service. I didn’t until I was posted to it.

“I spent a lot of my early years in the NS on the Minesweepers, LÉ Grainne and LÉ Fola until their decommissioning in 1986. It became a matter of pride coming to the end of the sweepers to get them out for one more patrol.”

Having had such a wide and varied career at sea, and having served on eight different ships, we asked Dermot what were the some of the most memorable occasions, he says that “One of the highlights of my career was when I was posted to LÉ Eithne in June 1986. She was NS ship to transit the North Atlantic. We made our first port of call in Bermuda and then on to New York for the rededication of the Statue of Liberty. We were the last surface ship to enter New York Harbour and took the salute from approximately 45 other naval ships from around the world. A proud moment as the Irish Navy took its place among the navies of the world. I still remember that trip even though it was over 35 years ago.”

Another highlight for Dermot was the much loved and storied NS pipe band, “I started playing drums with the Thomas Davis Pipe Band in Mallow when I was 10. I was one of the first to join the newly formed Naval Service Pipe Band. The highlight of the bands short life was winning the Defence Force Pipe Band Championship in 1996. The band was disbanded shortly after that.”

Today, ÓNE is a veteran’s organisation, a registered charity for all veterans of the Defence Forces, a company limited by guarantee (CLG), and an approved housing body (AHB). Its primary objective is to support the needs of Irish veterans by the provision of accommodation to homeless veterans in its Veterans’ Hostels, and the provision of other advice and support to veterans through its nationwide network of Branches and Veterans’ Support Centres. ÓNE’s services are available to all veterans, the women and men of the Defence Forces and they also facilitate homeless veterans from other countries living in Ireland from time to time.

ÓNE currently provides accommodation (board and lodging) for approximately 49 veterans, who otherwise would be homeless, in its three residential homes in Athlone, Dublin and Letterkenny. ÓNE has created a nationwide network of Veteran’s Support Centres (VSC) based around its 36 Branches. ÓNE is developing a 5-bedroom hostel in Cobh to address the increasing challenge of homelessness among veterans, and this will be followed by a 6-bedroom facility in Cork City, leading to the availability of more single rooms for homeless veterans.

Dermot says that ‘Cobh and Cdr Crosbie branches will be running the VSC in Cobh jointly, ensuring that there will always be someone there to provide assistance when required.’ One of its biggest fundraisers is the annual Fuschia Collection. Due to the Covid-19 pandemic, this vital source of funding raising has been unable to take place. Dermot speaking to The Journal said that ‘Everyone knows what the British Legion poppy is. We’re trying to promote what the Fuschia is.’

Dermot in offering his congratulations to all serving sailors, veterans and their families on the occasion of the anniversary says that, “In a career that spanned 21 years I thoroughly enjoined my service life. I had good times and bad times. But the good times far outweigh the bad. I made lifelong comrades that I’m still in contact with from my first day in Naas in 1977. Civilians have friends we have comrades.”

The complete digital edition of this Special Edition of An Cosantóir can be found via the link below.